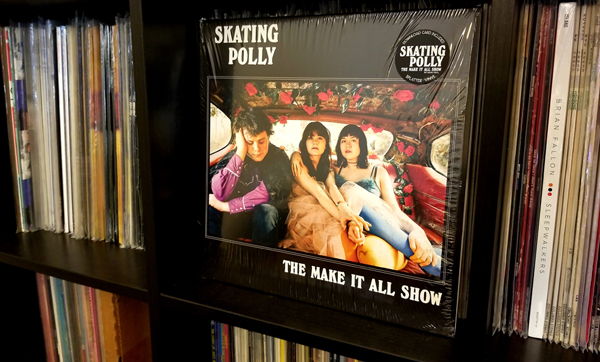 It turns out working full time while going to grad school, planning/executing a cross country move, and filming a documentary (more on that later) doesn’t leave a ton of time for other things. Who knew? Well, I have finished some of those activities, and can now turn some of my attention back to my website updates, and that means it is time to catch up on 2018 record reviews. First up: Skating Polly’s latest full-length, The Make It All Show. This one was released back in May. I do not think it has gotten nearly the attention it deserves. This is an excellent record, and the best they have released to date.

I think people have long gotten hung up on how young the members of Skating Polly are. Focusing on that automatically caps how good you think the music can be. It becomes, “Wow, that’s great for their age,” instead of just, “Wow, that’s great.” It’s time to drop the qualifiers, folks. The Make It All Show is a killer rock record. Starting some time in 2017, if I recall correctly, Skating Polly went from a two-piece, to a three-piece, adding their brother, Kurt, to the lineup on drums (mostly). I love what this move did for the band – the musical depth that an extra member added was immediately obvious.

The first (and only, so far) pressing of The Make It All Show was on a really cool pink and red splatter vinyl, released on El Camino Media:

This record took an unexpected turn for me. I thought I had established a good idea of what to expect from Skating Polly musically. I’ve loved their energy since I first happened upon them at Riot Fest in 2015. Their harsher material best captures that energy and draws you in, but I have found that the tracks of theirs that keep me coming back have been the less-brutal, more-pop-influenced tracks. This has been true for their last three releases: “Dead Friends” and “A Little Late” on 2014’s Fuzz Steilacoom, “Pretective Boy” on 2016’s The Big Fit, “Black Sky” and “Louder in Outer Space” on last year’s New Trick EP…

Those types of tracks are great on The Make It All Show as well. Their louder songs, however, have made the leap. The grand standout on the album is “They’re Cheap (I’m Free)”. This song’s vicious auditory assault tore a path of destruction through my living room. Once I sifted through the wreckage, I played it again. The track begins with a perfectly evil, menacing bassline and clear calm-before-the-storm vocals. The intensity builds and explodes into a chorus of savage badassery. It’s freakin’ great. Check it out:

Next up: “Camelot”. This one has a similarly vicious intensity level. It’s a full-speed, shredding rock beast, with another killer bassline. The last couple of lines could easily be the chorus of another song. Here’s the official video:

I’ll wrap up with my favorite of the less-noisy tracks: Hollywood Factory. I don’t have a ton of insights on this one…it’s just a great pop song and ends up stuck in my head with great regularity. Here, again, is the official video (they make a lot of those):